Civita di Bagnoregio: how to get there and what to see

Civita di Bagnoregio is a magical, surreal, fantastic place located on top of a tuff hill that can only be reached by crossing a narrow pedestrian bridge. From there you can enjoy one of the most stunning panoramic views of the whole Lazio region.

Nick-named «the town that is dying«, due to the constant erosion of the tuff rocks where it is placed, this citadel half-way between Orvieto and Lake Bolsena has Etruscan and Medieval origins. Suspended in time and space, Civita di Bagnoregio is beyond doubt one of the most beautiful and characteristic Italian villages.

On foggy days, this wonderful town seems literally suspended in mid-air. want to find out more? Follow us! 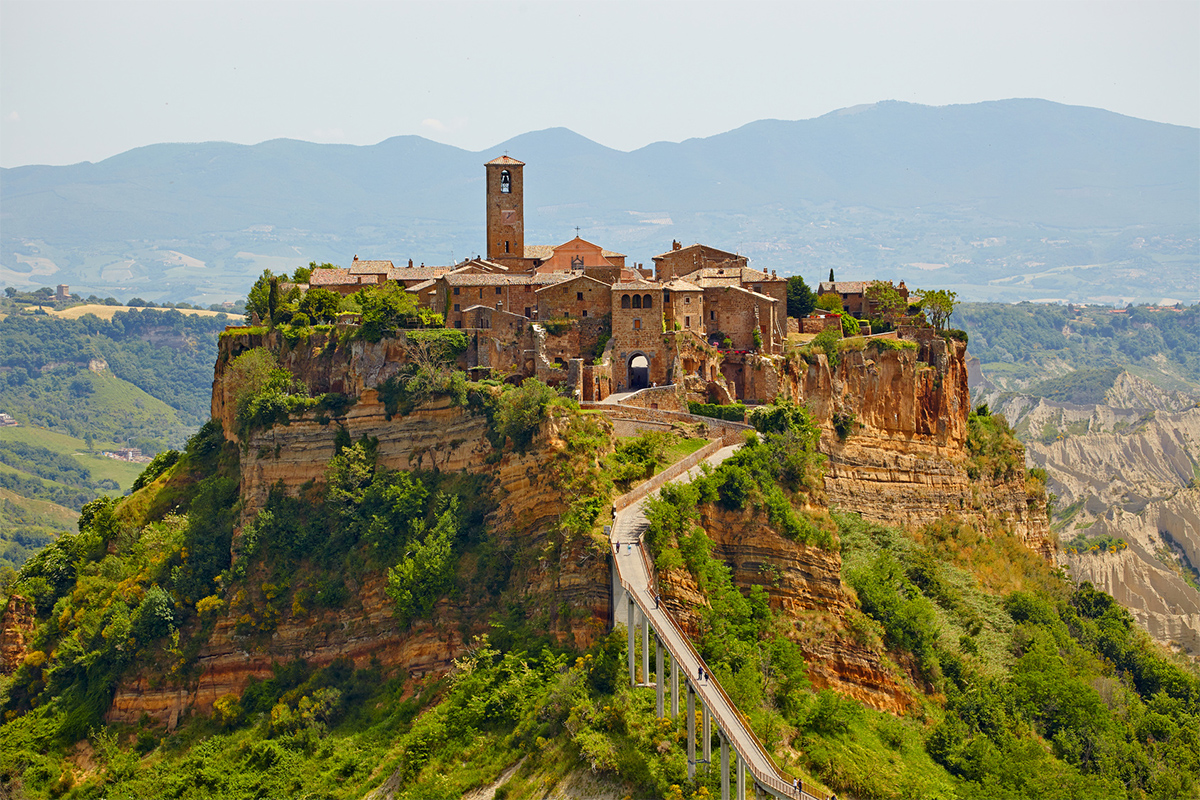 Civita di Bagnoregio was originally founded by Etruscans 2.500 years ago! The city at the time was formed only by a group of houses and where the modern Civita stands, there was the acropolis with a temple and a forum, core of civil and religious life of the whole town. Where Bagnoreggio stand now, there used to be the inhabited area of Rota.

Enclosed between to rivers, Rio Chiaro and Rio Torbido, surrounded and protected by Valley of Calanchi, this small upland was placed in an absolutely strategic position. In addition, the close mouth of river Tiber constitutes an important commercial and communication way. 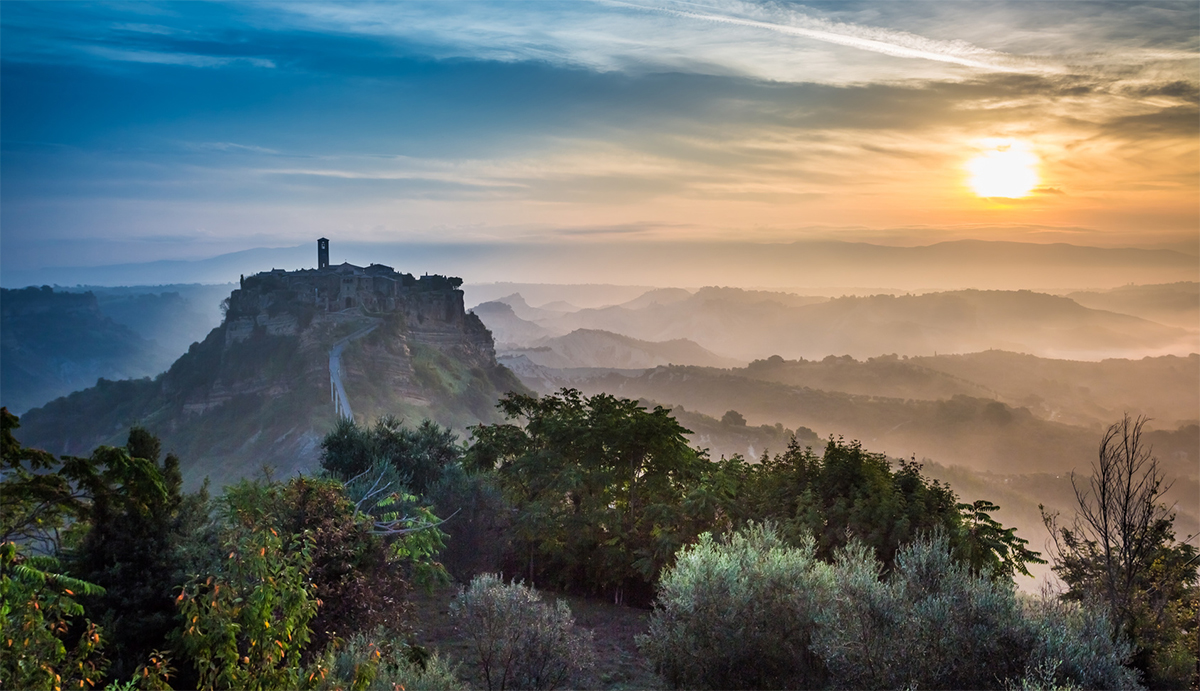 Etruscans already knew about the seismic instability of this area and built some structures aimed to protect the village from earthquakes, containing rivers and building drainage channels for a better flow of raiwater. Romans, in turn, restarted the works but ater them, their works were disregarded and the area fell soon in decay and it was finally abandoned.

To make things worst, the tuff hill where Civita stands is mine-strewn at its base by continuos erosion caused both by the action of two streams and by rain and wind. Civita is slowly and inexorably crumbling. It is no coincidence that writer Bonaventura Tecchi described it as «the town that is dying».

The wonderful village of Civita di Bagnoregio is today a very small town center where time seems to have stopped. It can only be reached by foot, walking along a concrete bridge built for the few citizens that remain here and for tourists coming to visit it from all over the world.

WHAT TO SEE IN CIVITA DI BAGNOREGIO?

As already mentioned, to get to the village of Civita you must cross the suspension bridge of 300 metres linking it to Bagnoregio. Arm yourself with a camera because at every step you will be faced with breath-taking views!

Once you cross the bridge, the first important monument that you will find is Porta San Maria, surmounted by a pair of lions grabbing two human heads, symbol of the despots defeated by the inhabitants of Bagnoreggio

Up ahead, via San Maria widens into the main square, where you can admire the Romanesque church of San Donato restored in the sixteenth century. Here are kept very interesting works, like the wonderful fifteenth-century wooden Crucifix by the school of Donatello, and a fresco by the school of Perugino. 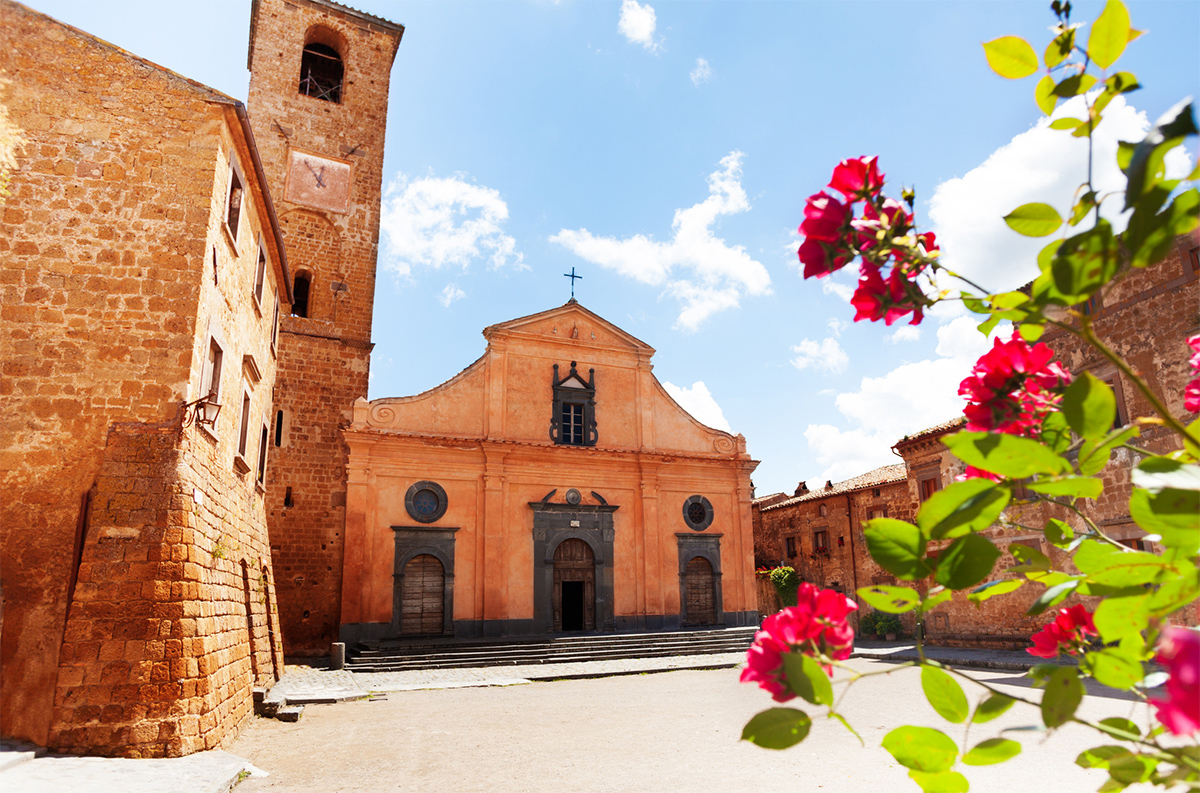 Main square in Civita with the Church of San Donato

The Renaissance buildings of Colesanti, Bocca and Alemanni stand out in the tiny alleys with the typical low-rise houses with small balconies and little ladders, typical of Medieval architecture.

You will surely not run out of things to do here in Civita. We underline the small Museum Antica Civitas, built inside a residence and the grotto of San Bonaventure, an old chamber tomb digged into the sheer tuff wall, named after Friar Bonaventure of Bagnoregio (1217-1274) biographer of St. Francis of Assisi.

It is said that during his stay in Civita, St. Francis cured a young boy named Giovanni di Fidanza, saving him from death. His mother promised to the Saint that once the boy would grow up, he would become a server of God. That is how Giovanni became Friar Bonaventure of Bagnoregio. 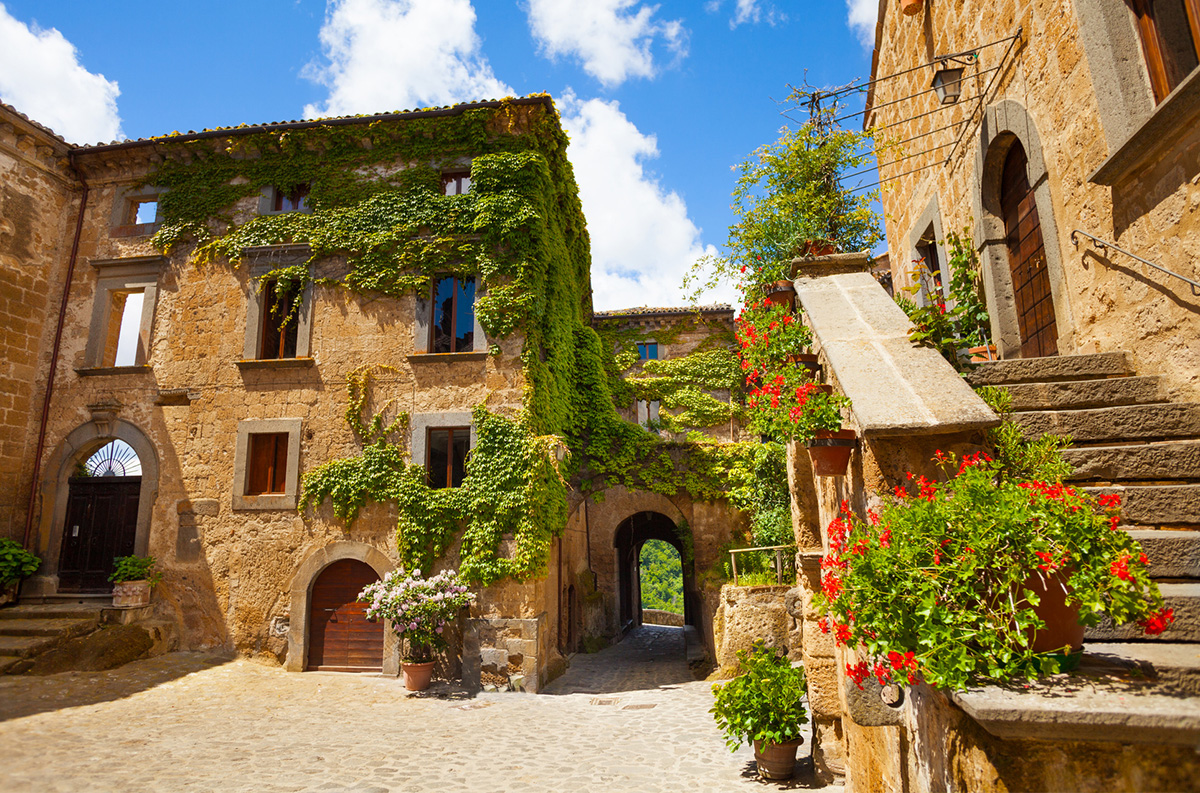 This suggestive village offers an authentic surreal and unforgettable atmosphere. Try to climb the East Cliff to admire the wonderful sight of the so-called «Ponticelli» (little bridges), clay massive walls, last trail of an erosive process started thousands of years ago and that still goes on.

Within the village, there are some restaurants, trattorias and bars and also bed & breakfast and local artisan shops.

Our article ends here. You just need to read the useful information box at the bottom of the page to organize your visit at best. As always. bon voyage!

HOW TO GET THERE

First of all, bear in mind that visiting Civita di Bagnoregio takes usually between 2 and 4 hours, not counting lunch or dinner time. The only way to get there is crossing the bridge that links the village to Bagnoregio. If you come by car, you will have to pay a fee to park it in the valley below the bridge. A bus will take you to the beginning of the bridge. You can as well get there by foot, but the road is uphill and quite steep. We have warned you!

Anyway, in our opinion, the best way to get to Civita di Bagnoregio is by car:

— from North: follow Highway A1 towards Rome and exit in Orvieto. After the toll both turn left and follow directions to Civita di Bagnoregio. Alternatively, driving along SS2 Cassia, by Montefiascone take the SS71 Umbro-Casentinese. After about 14 km turn right towards Bagnoregio.
— from South: leaving the A1 road after the toll both of Orvieto continue along the state highway (Rome and Bagnoregio are distant about two hours).

Civita di Bagnoregio is one of the most amazing towns we have ever visited. Its location is so incredible that you have to be there to believe (or watch our video on YouTube). You can reach it only by means of a narrow footbridge — people who have fear of heights should think twice about whether they really want to take a walk (ok, we are joking a little, it is not so narrow, it’s enough for a miniature van).

The town lies right next to the newer town of Bagnoregio and is located 20 km from Orvieto and 15 km from Bolsena.

Secondly, you can take a chance and try to drive to the parking lot Parcheggio Civita di Bagnoregio (P2; GPS: 42.625598, 12.104431) located already very close to the footbridge, or even better, right down to the footbridge — we noticed that some people leave cars there, too (P3; GPS: 42.626490, 12.110299), but we cannot guarantee that it will be possible to get there — it looked like a little illegal parking lot or something like that (beware of prohibitory traffic signs!). In addition, in the summer season everything will probably be already occupied (unless you arrive at 7 am). We chose the first option, i.e. we left the car in Bagnoregio and walked to Civita di Bagnoregio on foot.

A few words about the history of the town

From what we learned, the town was founded by the Etruscans, so it is very old. However, already in those days there was a problem related to soil stability — earthquakes, constant erosion and weathered rocks caused the buildings to crack and the land slumped, and in general it was not very safe to live there. The Romans tried to do something about it, but rather to no avail. In the Middle Ages, a number of interesting buildings were erected, but subsequent earthquakes and an epidemic contributed to the fact that the inhabitants finally gave up on this place and founded the «new Bagnoregio» a few kilometers away from the old one. The town actually began to die, but in the second half of the twentieth century came back to life because of tourists and actually now it survives thanks to them. We have already encountered a similar story in southern France in the case of the town called Les Baux-de-Provence.

Because, as we mentioned, we parked in Bagnoregio, we had to first walk down the town streets to reach the final destination. The walk is simple, the road is not bothersome. Only at the end we had to go down the stairs. Because Bagnoregio and Civita di Bagnoregio lie on separate hills, you have to go down first to climb again (on the bridge). On the way we passed a great vantage point, the so-called Belvedere (A; GPS: 42.625876, 12.105876), from which we were able for the first time to admire the panorama of the town and the bridge leading to it. If you leave the car in the P2 parking lot, just go right and in a moment you will go through the gate and you will find yourself in something like a miniature park with a bar, where you can buy for example something to drink or eat. The vantage point is just behind the gate. From this place we go down the stairs to the street Via Bonaventura Tecchi and after about 300 meters we are at the very entrance to the bridge.

Finally we reach the place (B; GPS: 42.626168, 12.109575), where the famous footbridge leading to Civita di Bagnoregio (called Ponte per Civita) begins. It is about 270 meters long and is suspended high above the gorge separating the two hills — our target is on the top of one of them. This bridge was built in the mid-1960s and replaced the old wooden structure from 1944. The views from the bridge are amazing, however, as we have already written, someone who has a serious fear of heights should be supported by another person while passing through it.

It should be remembered that entering the bridge (and, practically speaking, entrance to the town of Civita di Bagnoregio) is payable and in 2019 the price was 5€ per person. However, this is really worth paying, because the aesthetic experiences will definitely outweigh the costs.

The footbridge rises slowly first and then runs steeper. After the mentioned 270 meters, we are already at the entrance to the town, i.e. the gate of Porta Santa Maria (C; GPS: 42.6273967, 12.1126969), which is characterized by several interesting carvings, one of which depicts a pair of lions holding a human head in their mouths. After passing through the gate and passing the small square of Piazza Colesanti on the right, we appear on the main square of the town (D; GPS: 42.6273967, 12.1126969) — Piazza San Donato, where the church of San Donato is located. Before it, the Etruscan and Roman temples were located there. Its interior is very interesting, there are, among others, frescoes and a crucifix from the 15th century.

At the square there are restaurants, cafes, souvenir shops, as well as a geological museum. From the square, we first go left to reach the nearby smaller square, Piazza Vescovato (E; GPS: 42.6280478, 12.1139094), then we follow the Via Madonna della Maestà street, passing the church on the left. We see interesting, flowered buildings, then we visit small, side alleys to admire the panorama of the area. We note that, however, some people live here permanently — this certainly applies to one house with a nice, well-kept garden (F; GPS: 42.628017, 12.114746). We reach the end of the street and return to the main square, where we rest and drink a small, strong espresso. Then we come back embracing the panorama while exiting the Porta Santa Maria gate.

The return through Bagnoregio 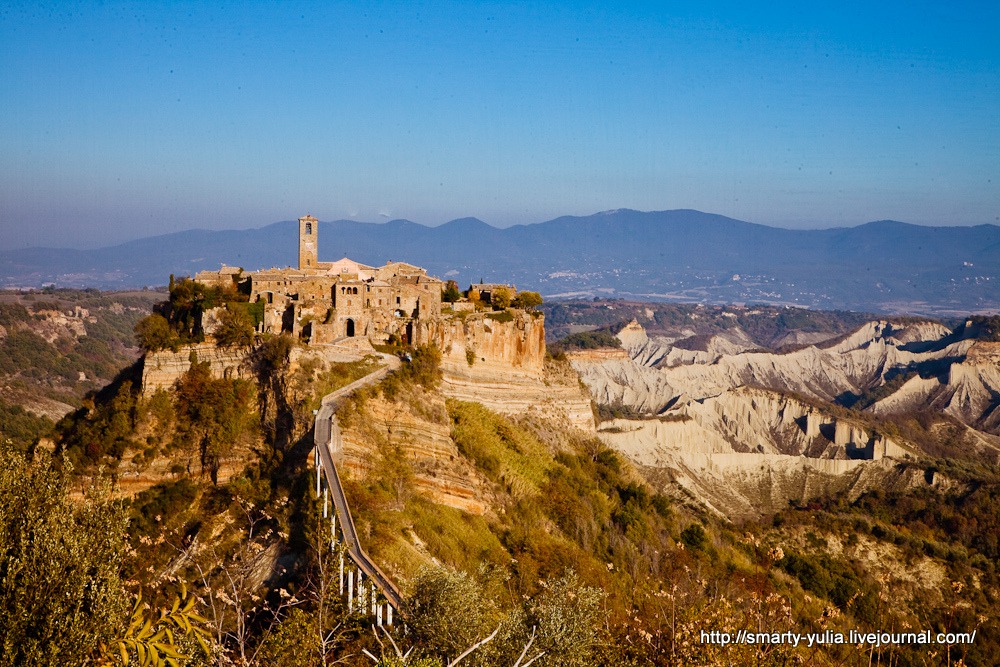 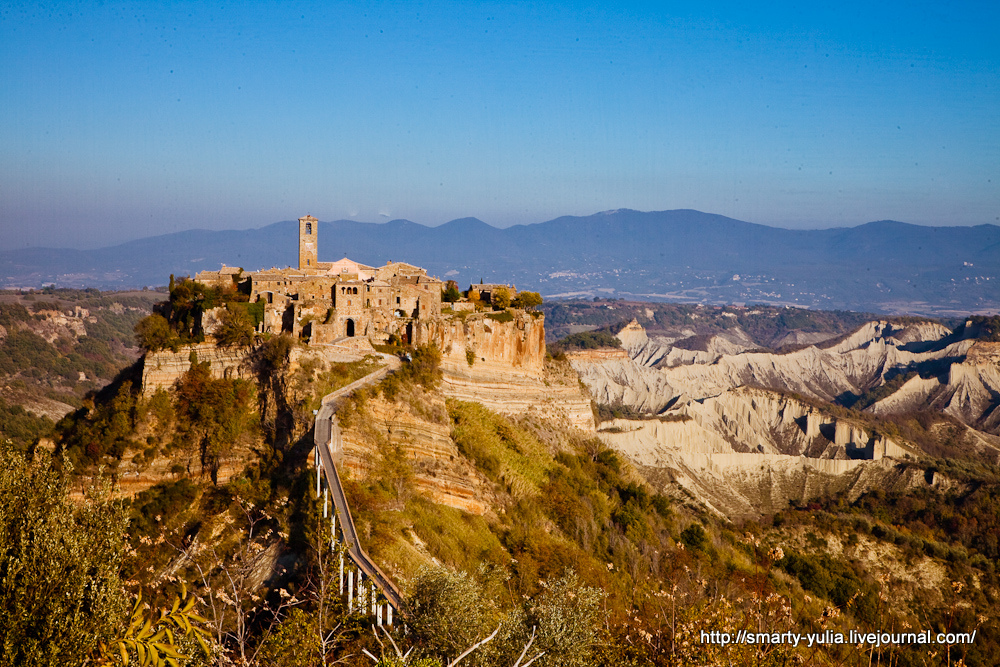 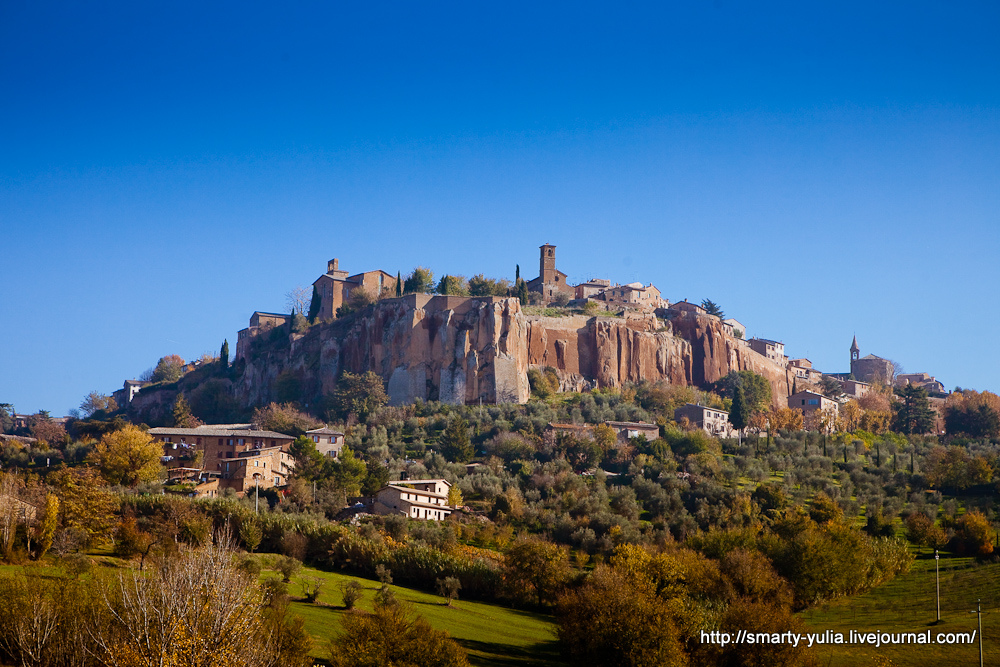 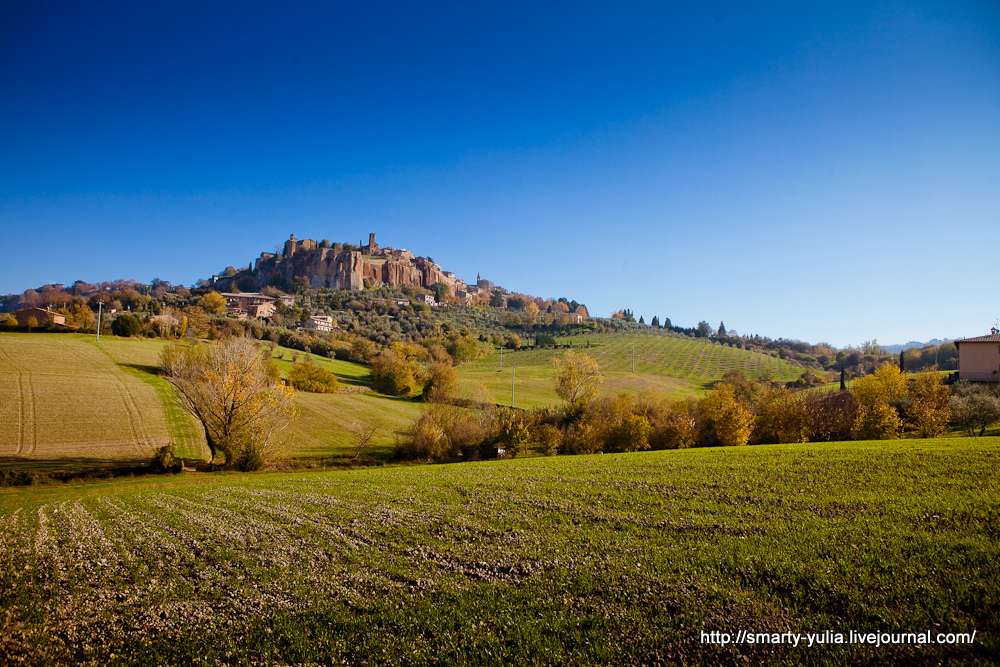 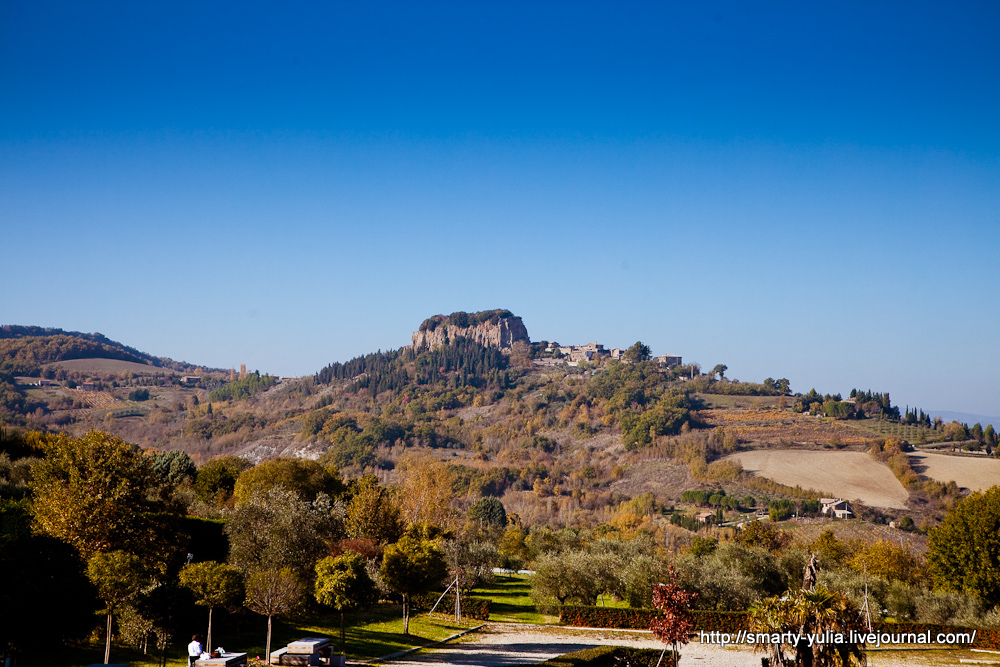 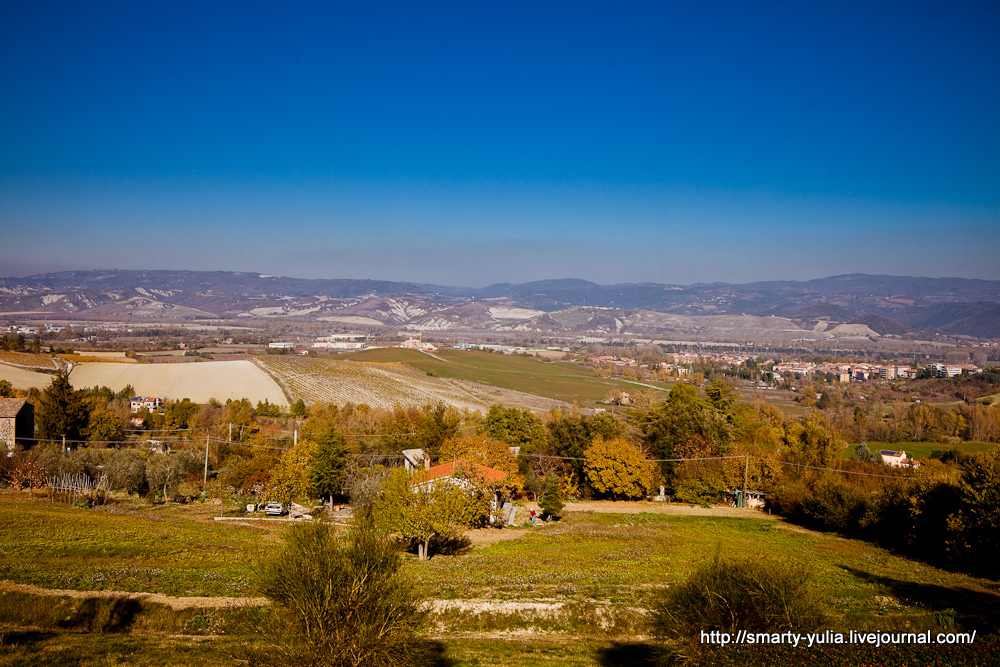 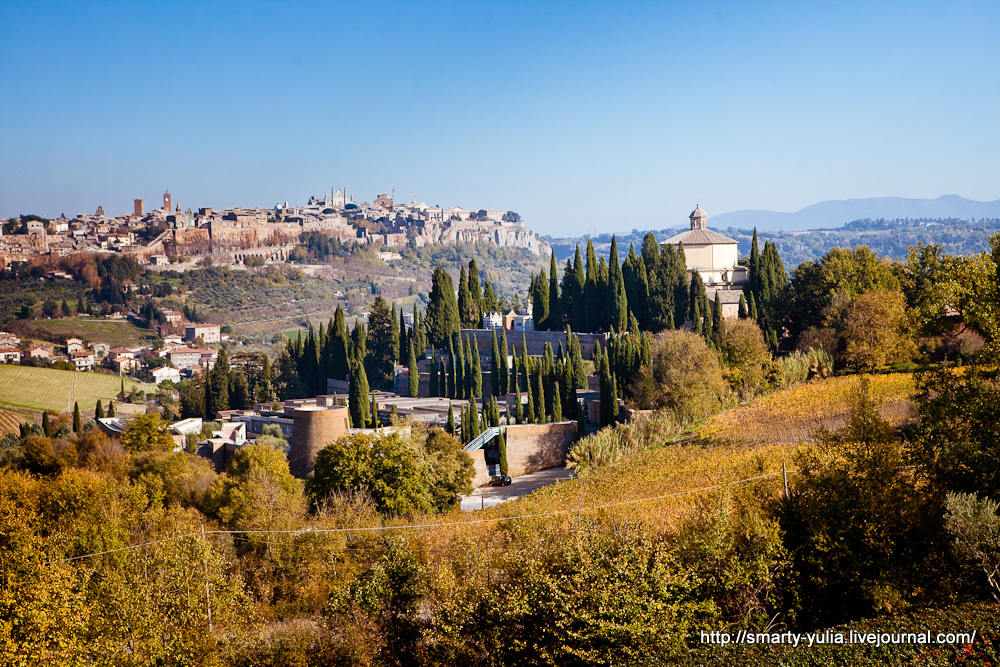 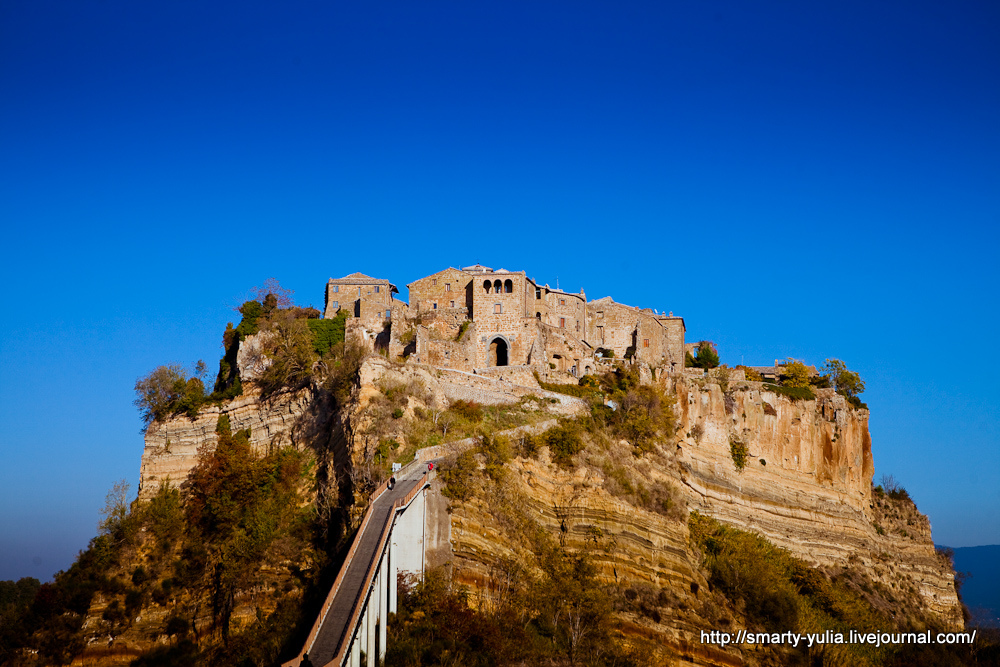 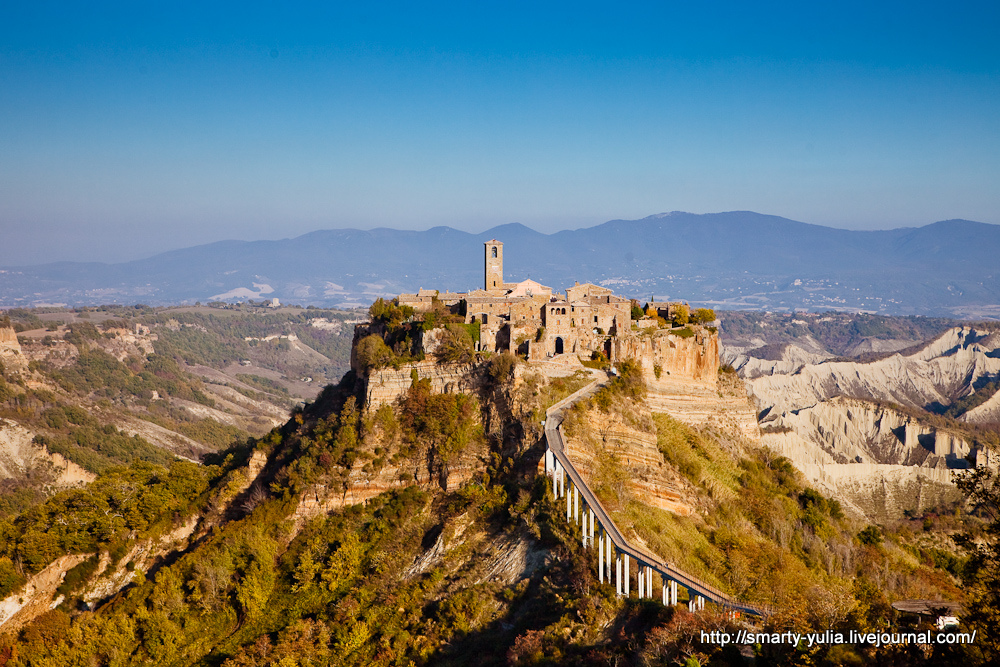 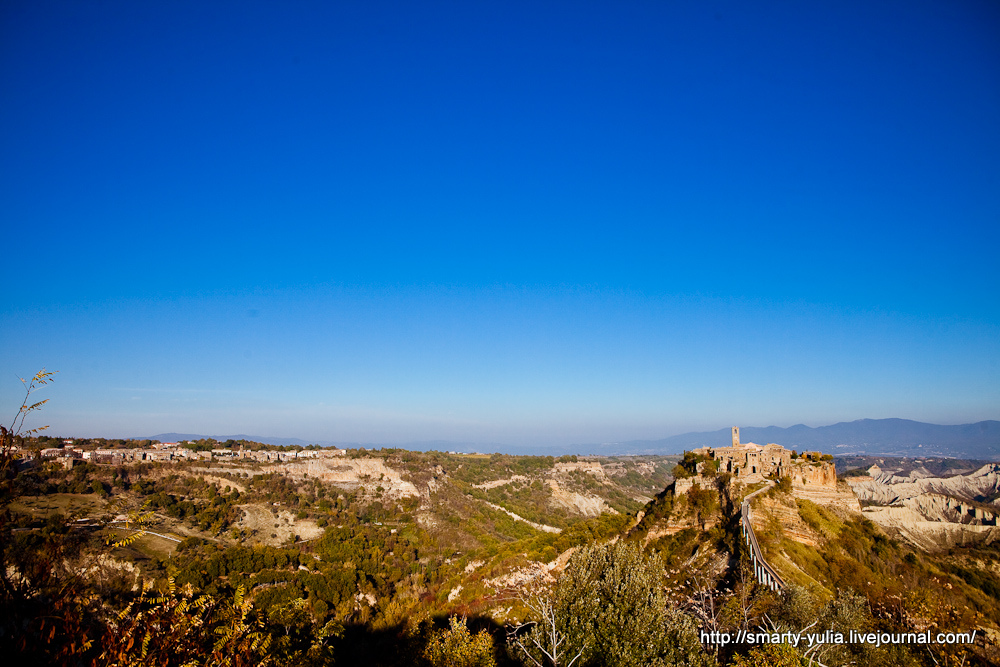 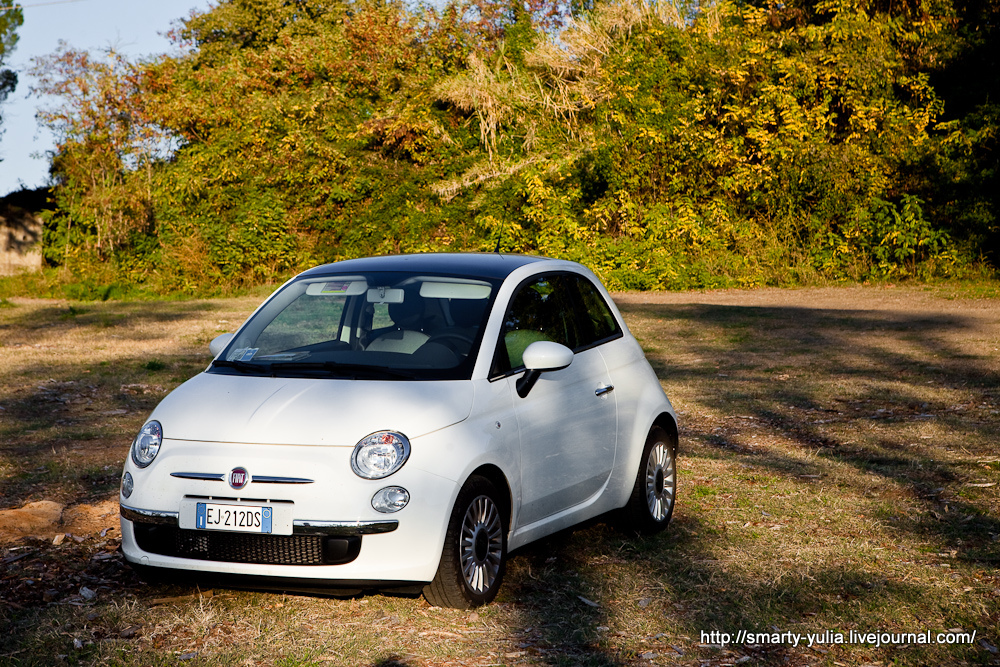 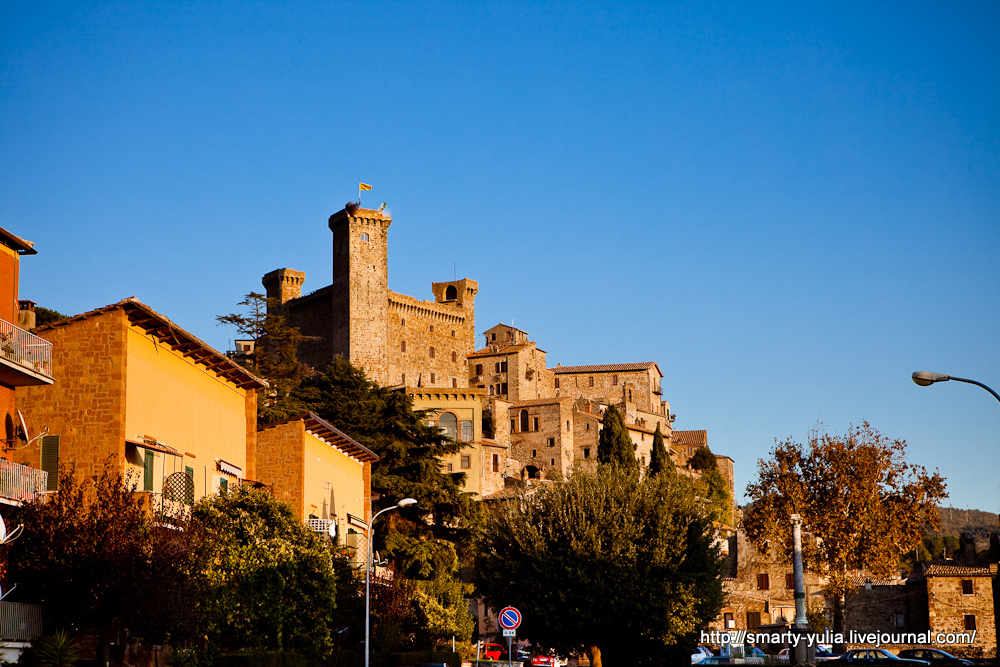 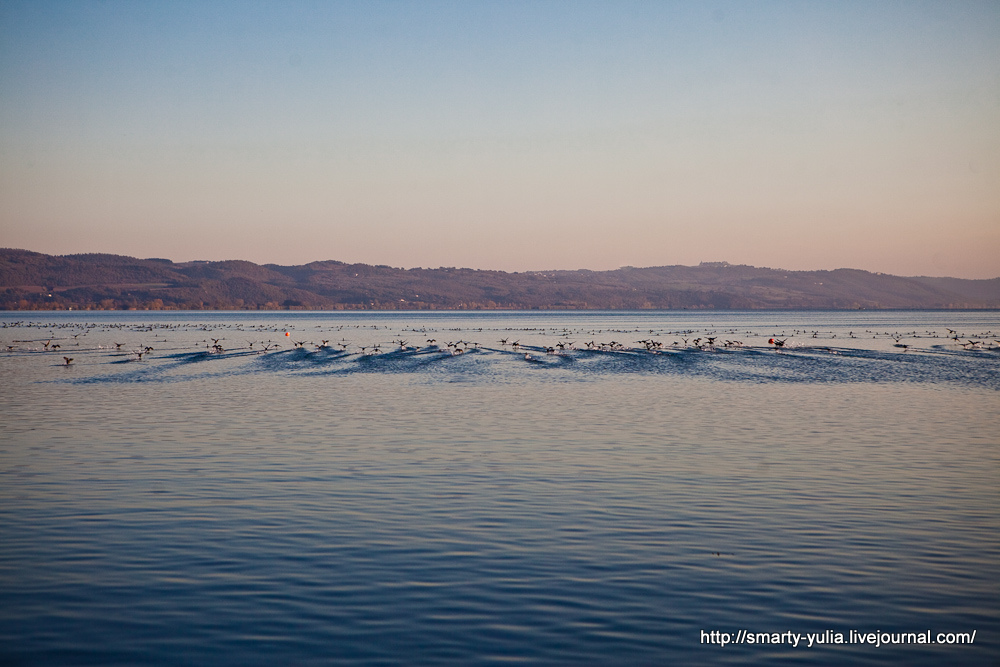 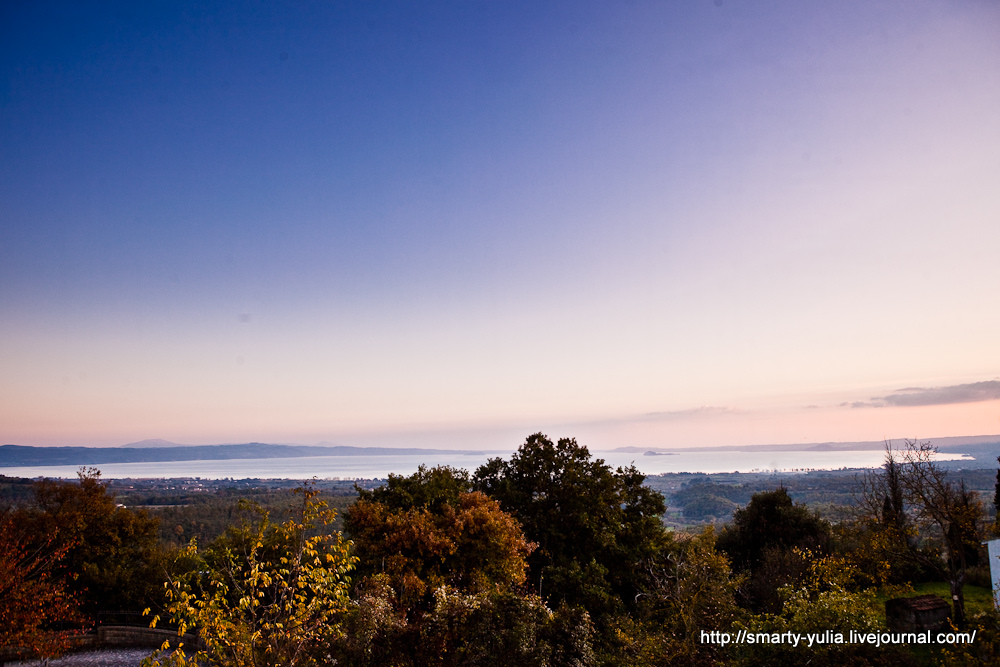 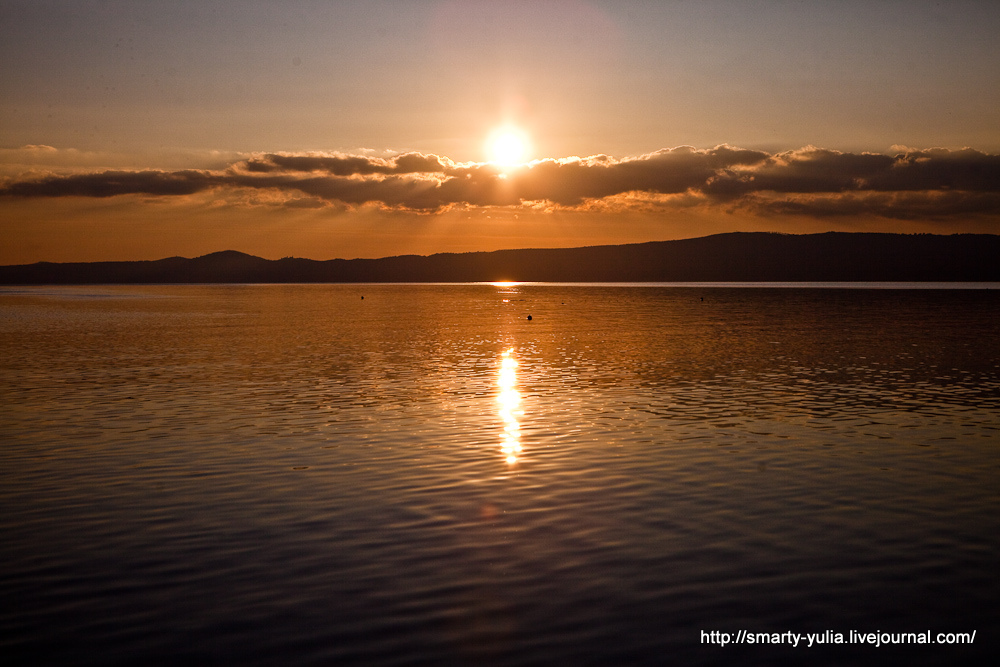 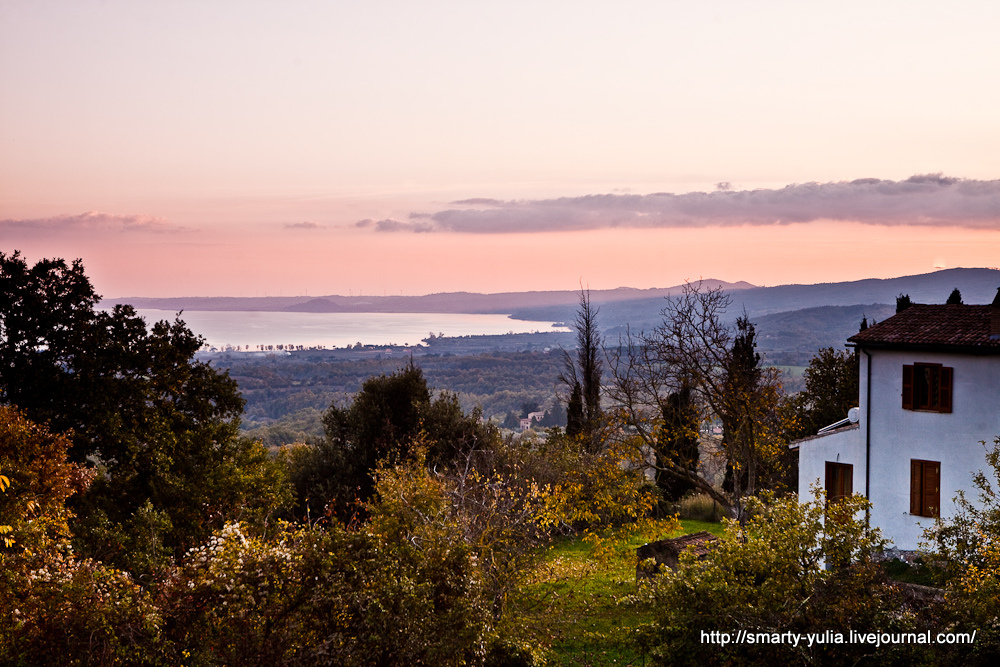 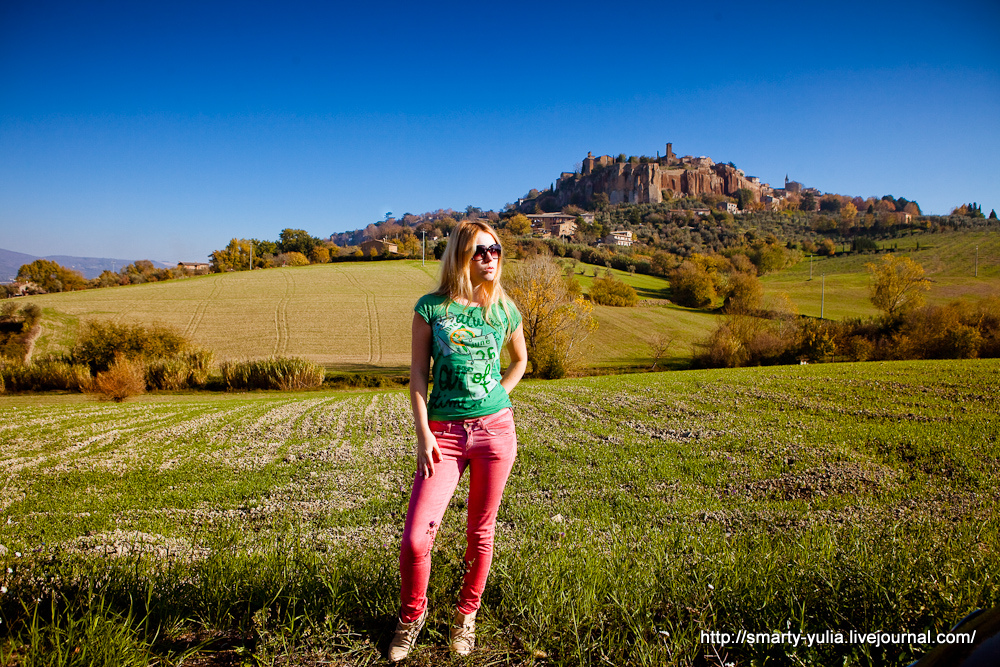 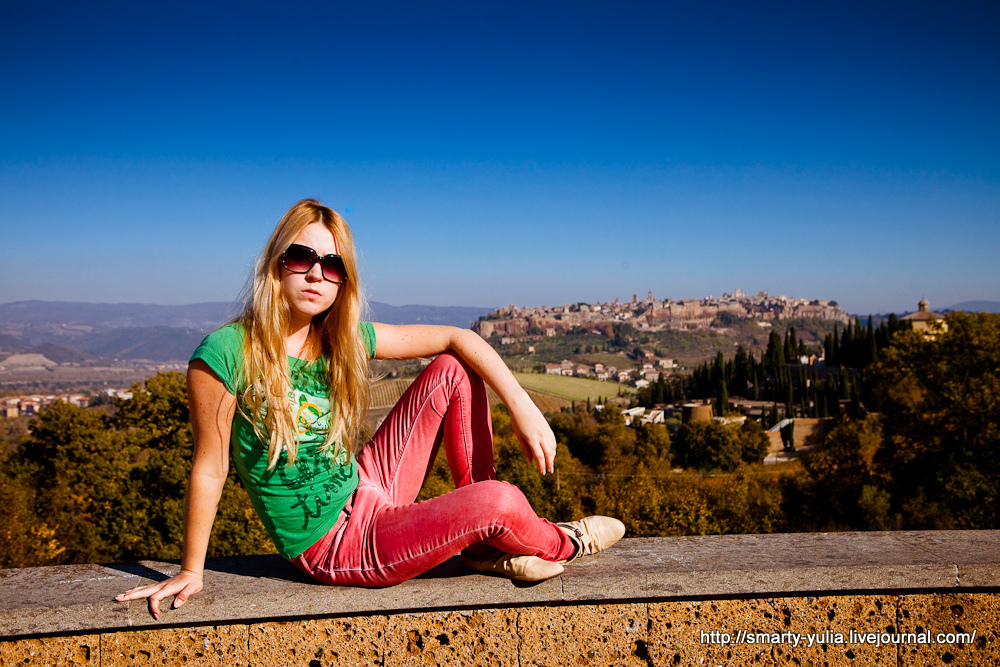 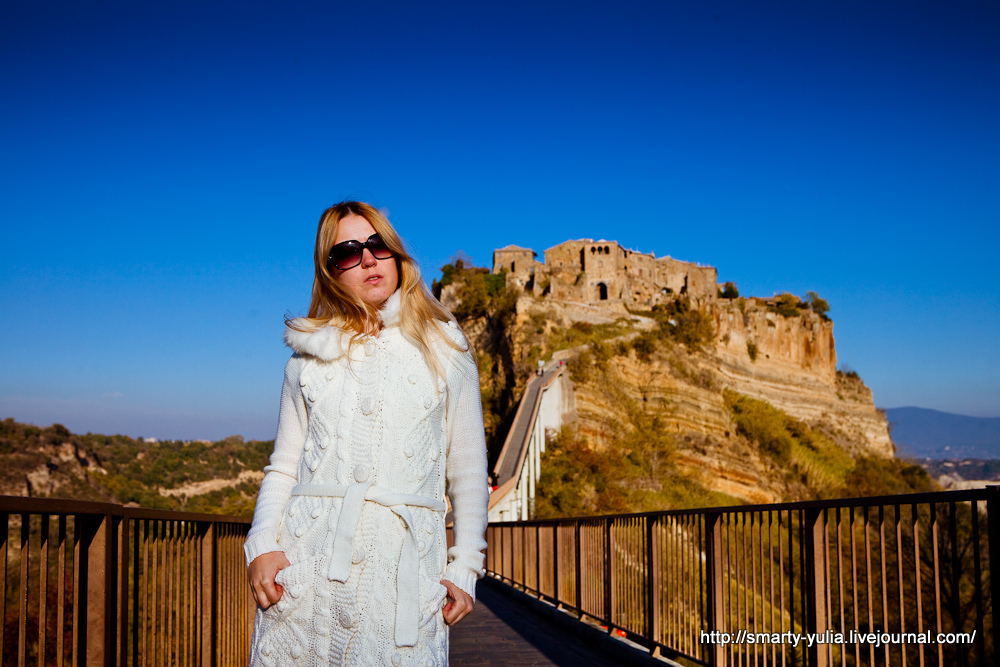 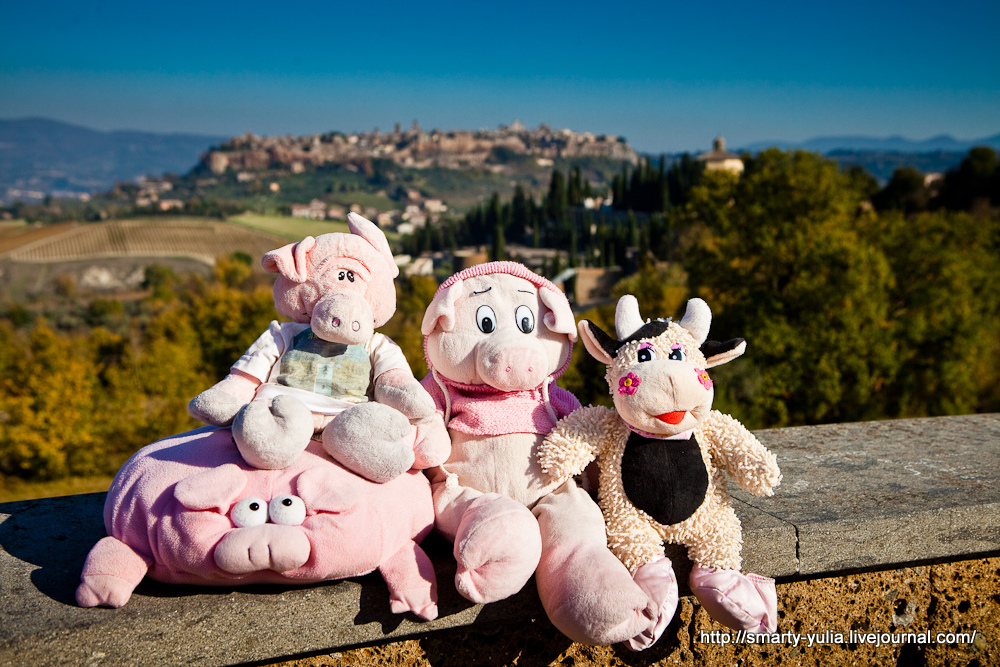 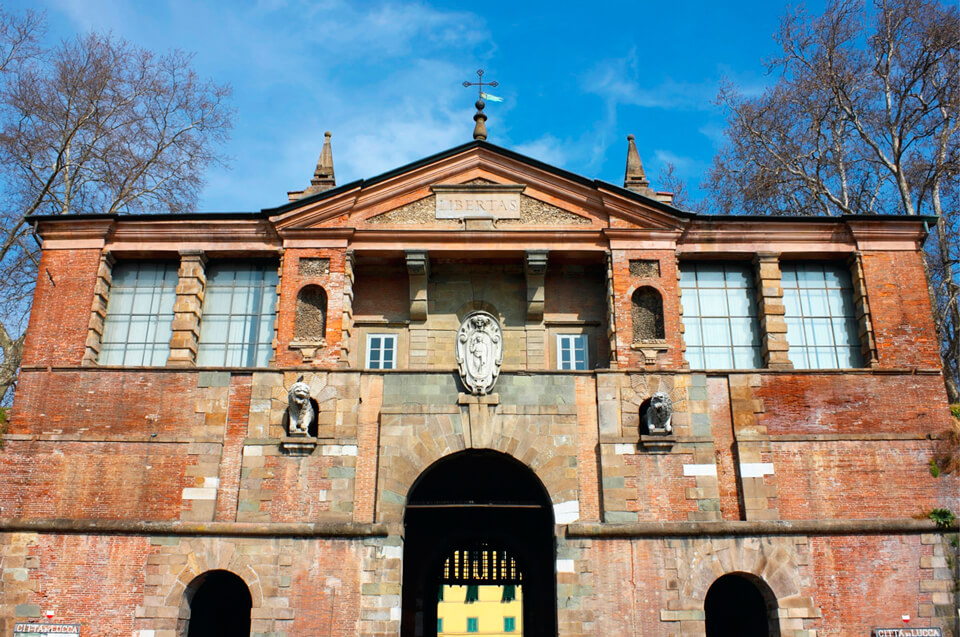 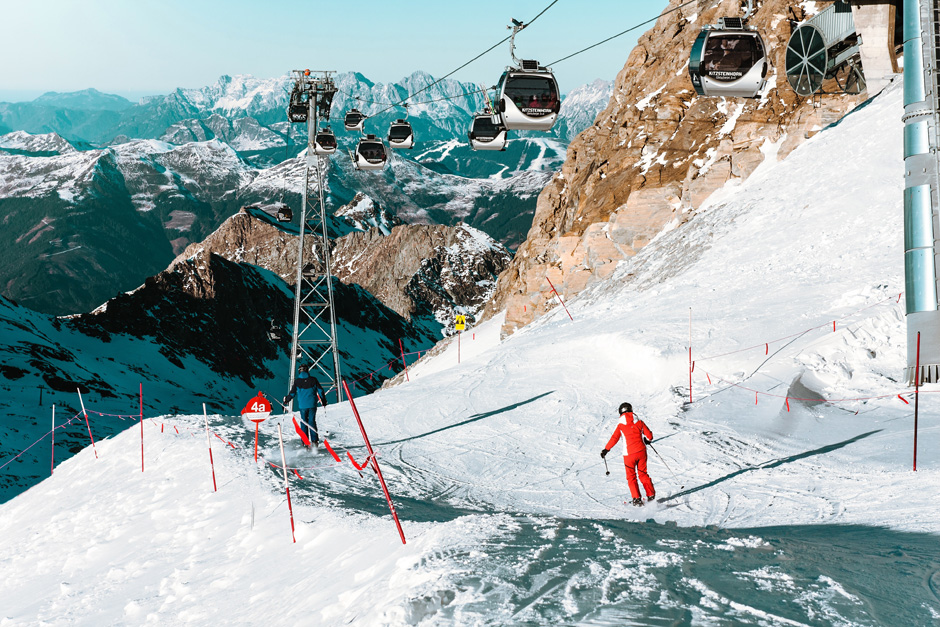 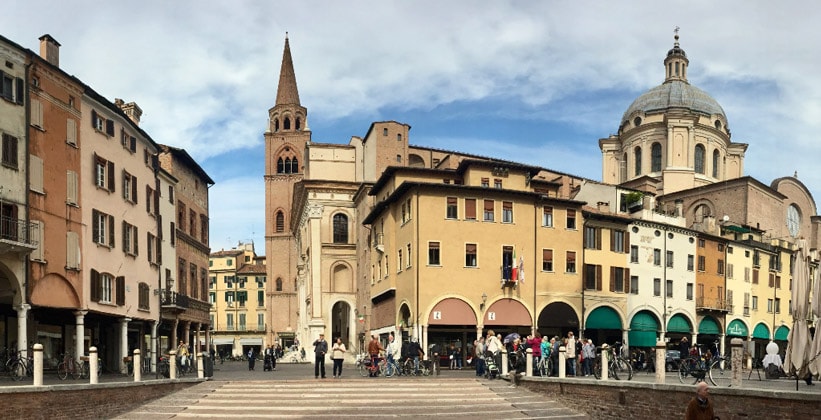 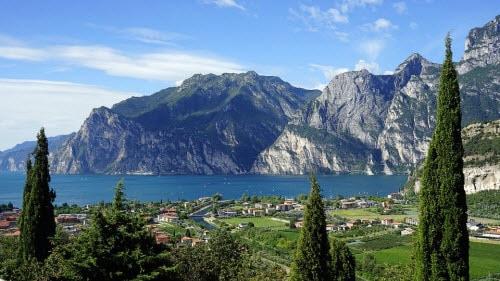